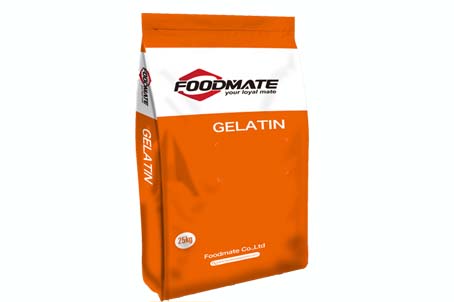 Application of gelatin in food – Foodgel™

Gelatin is the product of partially hydrolyzed collagen. Collagen molecules are spiral bodies formed by three polypeptide chains intertwined with each other. Through the processing of the process, the collagen molecule spirochetes are denatured and decomposed into a single polypeptide chain (α-chain) α-component and a two-chain β-group It divides the γ-component composed of three α chains, and the molecular chain fragments between and smaller than the α-component or larger than the γ-component.

Application of gelatin in food

Candy additives
According to reports, more than 60% of the world's gelatin is used in the food and confectionery industry. In the production of confectionery, gelatin is used to produce toffee, egg whites, marshmallows, marshmallows, crystal flowers, gummies, and other soft candy. Gelatin has the function of absorbing water and supporting the skeleton. After dissolved in water, gelatin particles can attract and interweave each other to form a network structure of stacked layers, and condense as the temperature drops, so that sugar and water are completely filled in the gel voids, So that the soft candy can maintain a stable shape, even if it bears a large load, it will not deform. The general dosage of gelatin in candy is 5% ～ 10%.

In the production of confectionery, gelatin is more elastic, tough, and transparent than starch and agar. Especially when producing soft candy and toffee with sufficient elasticity and full shape, high-quality gelatin with high gel strength is required.

Frozen food improver
In frozen foods, gelatin can be used as a jelly agent. Gelatin jelly has a low melting point, is easily soluble in hot water, and has the characteristics of the instant entrance. It is often used to make meal jelly and food jelly. Gelatin can also be used to make jelly. Gelatin jelly does not crystallize in warm syrup that has not been melted. Warm jelly can be re-formed after the clot is crushed.

Gelatin can also act as an emulsifier for some meat products, such as emulsifying the fat of meat sauce and cream soup, and protect the original characteristics of the product. In canned foods, gelatin can also be used as a thickener, often adding powdered gelatin, or a thick jelly made up of one part gelatin and two parts water.

Beverage clarifier
Gelatin can be used as a clarifying agent in the production of beer, fruit wine, liqueur, fruit juice, rice wine, almond milk beverage, and other products. Its mechanism of action is that gelatin can form flocculent precipitates with tannin. After standing, the flocculent colloidal particles can be adsorbed, coagulated and clumped together with turbidity, and then precipitated by filtration, and then removed by filtration.

For different beverages, gelatin can be used with different substances as needed to achieve different results.

In recent years, countries such as Japan have used gelatin for food coatings. Coating gelatin on the surface of food has the following advantages:

In food production, gelatin can also be used to make cakes and various icings. Due to the stability of gelatin, this sugar coating will not penetrate into the cake when the liquid phase increases even on hot days, and it can also control the size of sugar crystals.

In food packaging, gelatin can be synthesized into gelatin film. Gelatin film is also called edible packaging film and biodegradable film. It has been proved that the gelatin film has good tensile strength, heat sealability, high gas barrier, oil and moisture resistance.

Contact us for more information on Technical Support, Free samples, FOB Price, etc. You will be replied to within 2 hours.